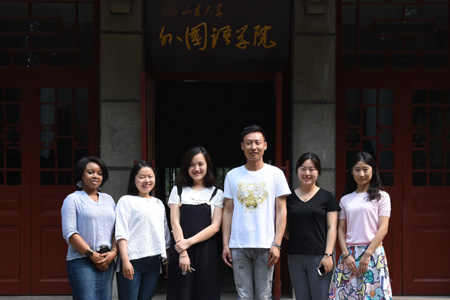 Department of Spanish Language and Literature

The Department of Spanish Language and Literature was established in 2006 and started enrolling Spanish-major students in 2007. It is one of the first undergraduate programs in Spanish language and literature in Shandong Province. At present, the Department has 7 faculty members including 1 professor, 1 lecturer, 3 assistants, and 2 native-speaker teachers. These teachers take on the teaching of Spanish for Spanish-major students, students who take Spanish as a minor and students from other programs who take Spanish as a selective course.

The undergraduate program in the Department highlights quality education, and centers on the cultivation of students with creative mind and practical abilities. Based on the teaching of Spanish language and literature, students are trained to have a better knowledge structure, solid language skills, an in-depth understanding of the literature, art, history, culture, politics and economy of Spanish-speaking countries. With a good mastery of Spanish language and proficiency in listening, speaking, reading, writing and translation, students in the program can expand their specialties to other programs of the university.

The program has established good cooperative relations with the University of La Rioja in Spain. Ever since 2006, the University of La Rioja has been offering annually the Spanish government-sponsored full scholarships to excellent students in the Department. From 2008 to 2010, Shandong University, in cooperation with China Scholarship Council, joined the “Cuban Government Scholarship” program and sent its Spanish majors to Cuba for one-year overseas study.

The faculty in the Department take the priority of cultivating the best students of the Spanish language in China. They are now working with originality and great enthusiasm in teaching and research for the progress of the School and the University.

Department of Spanish Language and Literature