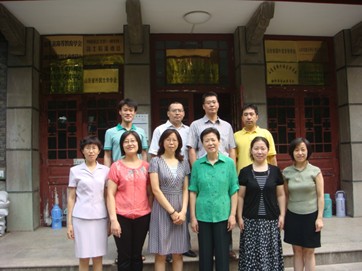 Department of Russian Language and Literature

The Department of Russian Language and Literature is among the earliest in China to enroll undergraduates majoring in Russian. Mr. He Feng and Mr. Fang Wei'ai served successively as chairs of the Department during its beginnings. Their work and direction laid a solid foundation for the establishment of the Foreign Language Department. In 1993, the Department was authorized to initiate an MA degree program. In 2011, the Department was given approval to initiate a doctoral degree program on Russian Language and Literature, which will enroll doctoral students in 2012. The Department is now a member of the Russian Group under the Steering Committee for Foreign Language Teaching in Higher Education Institutions under the Ministry of Education，and the executive director unit of the Russian Teaching Studies Association in China. Professor Li Xueyan is the chair of the Department and Profesor Zhang Su is the deputy chair.

In recent years the department has been led by Professor Cong Yaping, a Pushkin Medal winner and a celebrated expert in teaching Russian translation and Russian language and culture. Under her leadership, the departmental faculty members have cooperated well in forging ahead with determination and have made a series of achievements. In 2006, the Department successfully hosted The 5th Russian Contest of Universities in Southern China. In 2007, the Russian language and literature program was rated as an Excellent Program of Shandong Province. In 2008, the faculty of the Department was awarded the title of “Shandong University Excellent Teaching Team.” In 2009, the Russian Translation course was rated as a National Outstanding Course. In the same year, the Department successfully hosted the 4th Seminar on Russian Translation Theory and Pedagogy in China’s Universities. At present the Department features Russian translation teaching and studies.

The Russian Department has an outstanding faculty team that has made major achievements in teaching and research. Currently, there are 10 faculty members in the Department, including two professors, five associate professors and three lecturers. Among them, one is a doctoral supervisor, six are MA supervisors, and eight have a doctoral degree. All of the teachers under the age of 45 have a doctoral degree. Moreover, 80% of the faculty members have overseas study experience. This faculty team is involved in the teaching and research of undergraduate, MA and doctoral programs. The Department currently has 112 undergradutes, and 20 graduates in its programs.

For the past several decades, the Department, though based in Shandong, has extended its vision first to the whole country and then to the world by actively adapting its advancement to the demands of economic development and social progress. It features a combination of breadth and specialization, teaching and research as well as cultural exchanges between China and the western world. It has enjoyed a good reputation among the Russian departments in China for its academic achievements, outstanding faculty, forceful innovation, creative ideas in education and sound quality in teaching.

The objective of the Russian language and literature programs is to develop students’ ability to communicate, translate, teach and conduct research in Russian and enable students to make use of their interdisciplinary talents in education, research, diplomacy, commerce and social services.

A guiding principle for the construction and development of the Russian language and literature programs has been to propel research through teaching and propel teaching through research. Over the past five years, faculty members have successively presided over or participated in over 20 research projects on the state, ministerial and provincial levels. They have published over 100 academic papers in key periodicals both at home and abroad, have edited and published 10 textbooks (or textbook supplements), and have published or translated seven academic monographs. They also have jointly compiled a textbook with teachers from the Peoples’ Friendship University of Russia. These teaching and research achievements have won the faculty members state, provincial and university awards many times. The faculty members also enthusiastically attend academic conferences both at home and abroad. In elevating their own scholastic fame and standing, they have made their voices heard and have presented an outstanding image of the faculty of Shandong University.

To develop students’ all-round qualities, the Department initiated a new way of offering students training both at home and abroad, on and off campus and in and out of the classroom. The Department combined the students’ overseas experience, their social practices and their classroom practices. The Department invites at regular intervals noted scholars in the country to give lectures and carry out academic exchanges in the Department. The Department regularly organizes Russian speech contests, parties, Russian Corner activities, opens Russian channels, and plays Russian films. The Russian periodicals and books available in the reading room and reference room provide the necessary resources for the students, and the autonomous learning classroom enables students to study in a quiet environment.

To sum up, in nearly 60 years of growth, the Department of Russian Language and Literature has developed its own features and its own academic brand. With elevated academic status and standing in the Russian programs in China, it has grown into an important base for cultivating talents in Russian language and literature.

Department of Russian Language and Literature