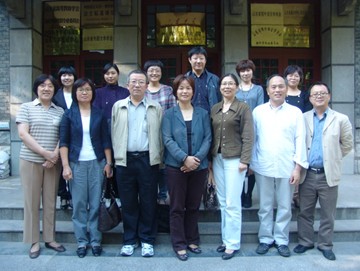 Department of Japanese Language and Literature

The Department has a strong teaching and researching faculty team in agreeable structure, and with rich teaching experiences and good educational background. Including researchers at the Japan Studies Center of Shandong University, the Department has 22 faculty members with 8 professors, 2 of whom are doctoral supervisors, 7 associate professors, and 7 lecturers. Of the faculty members, 10 are Ph.D. holders and one is a doctoral candidate. This young and outstanding faculty team guarantees the sustained progress of the Department and its development in Japanese studies.

Through years’ construction, the Department has made remarkable achievements in Japan-related areas. For the past 5 years, its faculty members have supervised or participated in 6 state-level research projects, including Studies on Chinese Literature Relations in East Asia and The Changes of Ethical Values of Japanese Women, and 8 ministerial/provincial-level research projects including China’s Lost Books Extant in Japan-Studies on Buddhist Efficacious Fictions of the Tang and Song Dynasties, Studies on Christianity and Romanticism in Modern and Contemporary Japanese Literature, and The Spreading of Confucian Classics in Japan and Studies of Confucianism in Japan. In addition, another four projects are supported by the Japanese Academic Promotion Society and other Japanese financial groups.

Having received 6 ministerial or provincial awards, the faculty members in the Department have published over 100 academic papers and 10 monographs, textbooks, or translated books, among which A History of Japanese Classical Literature and A History of Japanese Literature have been listed as State-planned Textbook for “Eleventh Five-Year Plan. Jointly with the Japan Studies Center, it has hosted the “International Symposium on Japan Studies in East Asia”. All the above mentioned achievements have won the department’s good reputation and enhanced its teaching quality.

The goal of the Department in discipline development and student cultivation is to be innovative, while remaining its traditional advantages, and cultivate quality and interdisciplinary talents to meet the needs of social development. Currently, the Department has over 250 undergraduates and over 30 postgraduates. About half of the students have the opportunities to study in Japan on short-term or long-term exchange programs. The graduates of the Department have been well received on the job market.

For over 40 years since its the founding, the Department has produced a large number of talents who now hold positions in China’s Foreign Ministry, in Foreign Affairs Departments of provincial and municipal governments, in education institutions both at home and abroad, and in Japanese enterprises or Japanese consulates and foreign affairs units in China. They are making great contributions to  Sino-Japan relations, Japanese education, and Japan studies.

Department of Japanese Language and Literature