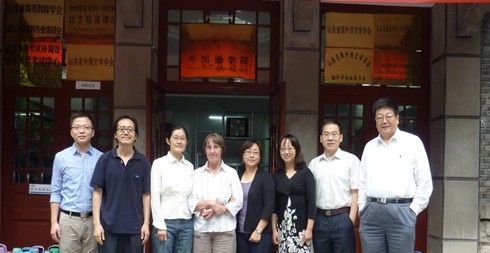 Department of German Language and Literature

The Department of German Language and Literature was founded in 1996. It offers a 4-year undergraduate program and aims at cultivating students to have solid linguistic foundation, a deep and wide knowledge of German society and culture, as well as a good mastery of German language and proficiency in listening, speaking, reading, writing and translation. Students graduated from the Department can undertake jobs like interpreter, researcher, teacher and administrator in such fields as diplomacy, trade and economy, culture, news media, and tourism. In the meantime, students are trained to acquire good foreign language skills and basic research capabilities, be able to use a second foreign language, know how to collect information and conduct scientific research, and have good abilities for practical work.

The main feature of the program lies in its objectives to help the students have a broadened vision, a profound understanding of humanity, and the ability of independent thinking and problem solving. Based on the teaching of German language and literature, students are trained to have a better knowledge structure, solid language skills, and an in-depth understanding of German literature, art, history, culture, politics and economy.

To enable students to have a broader international vision and have an in-depth understanding of Germany, the Department creates favorable conditions for students’ overseas studies. So far, the Department has established long-term cooperative and exchange relations with Augusburg University and Munich Language and Translation College in Germany. Every year about 20 students are sent to study on exchange programs to these universities. Besides, the Department attaches great importance to the students’ second-campus experiences and send exchange students to study in such famous universities as Tongji University, East China Normal University, and China University of Political Science and Law.

The Department is proud for its robust team of teachers who have rigorous scholarship, diversified educational background and favorable age structure. In addition to a native-speaker teacher of German, it has 8 faculty members, including 3 associate professors, 3 lecturers, and 2 teaching assistants.

The Department attaches great importance to the translation of German classics. The Chinese versions of World History of Philosophy and A Brief History of World Languages, translated by its faculty members, have been on the reading lists in many universities on the Mainland and in Taiwan.

Rigorous in teaching and research, the faculty of the Department takes the priority to cultivate students to have excellent moral and academic performance. The students of the Department have been making great achievements in the Test for German Majors (Grade Four and Eight) for many years. In 2011, the average score of the students in the Department in the Test for German Majors (Grade Eight) ranks the first in the country. Each year, a number of its graduates are admitted upon recommendation into MA programs at prestigious universities such as Beijing Foreign Studies University, Shanghai International Studies University and Tongji University. Some have the opportunities to study abroad. Many others are employed in state organizations, provincial foreign affairs agencies, state security departments, customs and ports, medias, universities, financial institutions, large enterprises and foreign companies.

Department of German Language and Literature